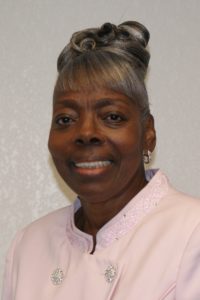 First Lady Marilyn E. Jones was born in Chiefland, Florida to the late Reverend John and Mother Ida Bell Phillips. She is the second eldest of eleven children. During her pre-teen years, Missionary Jones moved to Detroit, Michigan to live with her aunt.  Young Marilyn received her COGIC training under the guidance of her beloved guardian.   She was born again and filled with the Holy Ghost at age sixteen.

Missionary Jones received her Bachelor of Science Degree in Nursing from the University of Maryland and was commissioned a First Lieutenant in the United States Army Nurse’s Corp in 1976. At her first and only duty station, William Beaumont Army Medical Center (WBAMC), 1st Lady Jones met and married the love of her life, Pastor Leroy Jones.  They will celebrate 37 years of marriage this summer and 33 years in the pastorate this fall.

In 2005, Mother Marilyn Jones received her master’s degree in Guidance and Counseling from the University of Texas at El Paso.   She applies her knowledge through wisdom given by God.

Lady Jones works diligently with her husband in ministry, mentoring and proclaiming the Gospel of Jesus Christ.