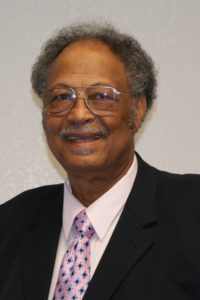 Pastor Leroy Jones was born in Temple, Texas, the second oldest of fifteen children. He received spiritual guidance from his late mother, Laura Collins, along with his late grandparents, I.G. and Eliza Morgan. Elder Jones was saved, and Holy Ghost filled in 1977, ordained a deacon in 1978 and called to ministry the same year.

His preparation for leading God’s people began at Greater Mt. Calvary Church of God in Christ under the leadership of Superintendent Roosevelt Odom, and at Holy Light COGIC under Bishop Juan O. Lawson where he served faithfully as Youth Minister and Mentor.

In 1982, Pastor Jones founded House of Prayer COGIC at 4807 Titanic Avenue and was ordained an elder in 1983. Two edifices were built at that location and the present sanctuary at 5940 Sean Haggerty Drive was completed in 2006.

A pastor for 33 years, Elder Jones is a visionary leader with a love for God’s people and a passion for the youth. His chief focus is Ministry and Evangelism.

Elder Jones served in the United States Army and completed technical training at TVI Institute, Albuquerque, NM. In 1999, he retired from AT&T with 30 years’ service as a Communications Technician. To enhance his Christian education, Pastor Jones has attended both Howard Payne and Park Universities.

Elder Jones has faithfully served and supported the Church of God in Christ Arizona Jurisdiction for more than thirty years. On October 15, 2010 during the 85th Annual Holy Convocation, Bishop Harvey T. Young, Sr., appointed Pastor Jones to the board of Administrative Assistants on which he currently serves as Chairman.

Pastor Jones has been married to the love of his life, First Lady Marilyn Jones for 37 years. They are the proud parents of Cheryl Criss and Isaiah Jones.